Does your cooling system use Freon? If so, you could end up paying thousands of dollars more than you need to.
Freon will become illegal to sell in less than three years, so you could be throwing money out the window. 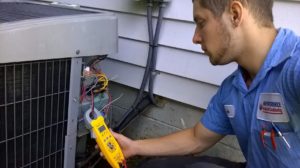 R22, otherwise known as Freon, is no longer made in the U.S. because of its impact on the ozone layer.

If you spring a leak or your system malfunctions, you could temporarily keep using Freon.

You could, however, get a new system that uses a Freon alternative. It’s primarily called R410a, which is a less invasive type of refrigerant. It still has an impact on the environment, but much less. This alternative is a little costly. New systems range anywhere from around $4,500 all the way up to $10,000. But here’s the catch, by January 2020 it will be illegal to sell Freon, so, you’ll be forced to upgrade.

There are some alternatives that mimic Freon, where you wouldn’t have to get a new system. But these alternatives are difficult to install properly, they’re expensive, slightly flammable and less efficient than the alternatives.

We are pledged to the letter and spirit of U.S. policy for the achievement of equal housing opportunity throughout the Nation. See Equal Housing Opportunity Statement for more information.